By Susanne Boersma and Franziska Mucha

On the occasion of its 20th birthday, the Museum Europäischer Kulturen (MEK) – Staatliche Museen zu Berlin invited international researchers and practitioners to a conference in Berlin-Dahlem. The conference entitled “What’s missing? Collecting and Exhibiting Europe” brought together perspectives from all around the world to start a dialogue and exchange on contemporary museum practices with regards to four main panels: Global Europe, Towards the Transformation of Collections of Everyday Culture, Methods and Structures, and Exhibiting Europe. Starting off with critical questions raised through historical collections and discussing the blank spots in museum practices, the two-day-discourse touched upon many urgent issues such as representation and participation by asking:

“How can a reinterpretation and contemporisation of collections and exhibitions through (post)migratory, queer, decolonial, fugitive, dis/abled or other marginalized lenses be established in mainstream museum work?”1

Cultural anthropological museums need to urgently address this question by reflecting upon institutional criticism to catalyse change. Many research projects within the POEM network touch upon related questions of social justice and inclusion in memory institutions, postcolonial thinking, contemporary collecting and the potential role of digital media therein. Thus, the conference offered a great chance to connect with other scholars and practitioners with similar research interests and to host the pilot of POEM’s first One-Stop-Shop.

The public evening lecture by Suay Aksoy (president of ICOM – International Council of Museums) took place in the blazing heat of Berlin on the 26th of June. In her presentation, she pointed to the many associations that came up when asking “What’s missing?” leading to an appeal for a new museum definition as “museums have radically transformed, adjusted and re-invented their principles, policies and practices”2. Following her inspiring call for change, the MEK invited all conference guests to a reception with birthday cake and bubbles in the museum garden.

The first panel on ‘Global Europe’ featured papers that highlighted how Europe is represented in the rest of the world and vice versa. The panel included speakers from each corner of the world with Gerald McMaster (OCAD University Toronto, Canada), Imani Tafari-Ama (University of the West Indies, Kingston, Jamaica), Akiko Mori (National Museum of Ethnology, Osaka, Japan) and Diana Pardue (Statue of Liberty National Monument and Ellis Island National Museum of Immigration, New York City, United States). Chair Judith Schühle, curator at the MEK, suitably introduced the panel by presenting a way to look at Europe: a rubik’s cube – interesting as long as it challenges and changes us. This metaphor holds up from a global perspective too, as proven by the presentations from the different speakers. They addressed depictions of Europe as the ‘other’, spoke of challenges that emerged when reconsidering redesigning a European exhibit in Japan and discussed how items once brought by European immigrants to the United States now function as a representation of European history. Invited speaker Imani Tafari-Ama was not able to attend due to visa restrictions, by which the focus of her presentation (read by Judith Schühle) became even more clear: there are persistent power relations that exclude people from the global South to participate in conversations on change and inclusion of their heritages in discourses of the global North.

The panel ‘Towards the Transformation of Collections of Everyday Culture’ followed this discussion with a focus on collecting. Presentations by Matthias Beitl (Volkskundemuseum Wien, Austria), Małgorzata Oleszkiewicz (Ethnographic Museum Kraków, Poland), Denis Chevallier (MuCEM, Marseille, France) and Eeva-Kristiina Harlin (University of Oulu, Finland) raised questions on the importance of passively or actively collecting the everyday and the use of objects to connect to the past. Matthias Beitl understands collecting as “creating common knowledge”, but the collection of everyday objects is not always seen as a necessary practice by governments and other funding bodies. Limited funding might, however, lead to novel collecting practices, such as developing shared collections between museums and collecting through temporary exhibitions. Decisions on which objects accurately represent contemporary life often ask input from (local) experts and audiences through various practices leading to new participatory forms such as ‘craftivism’. This process of future memory-making in and by memory institutions and communities sits at the heart of some of the POEM research projects.

After these first two panels, the programme continued with a talk between Berlin-based journalist Ferda Ataman and museologist Susan Kamel (University of Applied Sciences, HTW Berlin, Germany). This format entitled ‘Our Heymat! Your Museum? Why Diversity and Social Justice is Our Common Future’ provided room for playful but critical reflection on the practices in memory institutions. Using their own experiences of exclusion in both journalism and museums, Ataman and Kamel discussed perpetuating practices of stereotyping, as opposed to the desired diversity in canon, audiences, workforce and decision-makers. 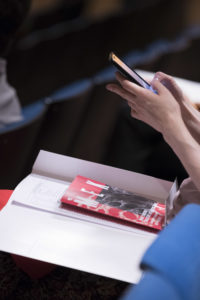 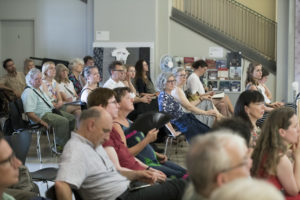 The conference room was exchanged for the museum to end the day with tours through the exhibitions or a queer tour of what is on display. In the museum foyer, visitors and speakers were invited to join the POEM fellows and add to the ‘Archive of Forgotten Memories’.3 The barbecue afterwards provided time for reflection, discussion and the chance to connect with museum professionals and researchers.

The second day of the conference started off with the theme of ‘Methods and Structures’, introduced by panel chair Iris Edenheiser, deputy director of MEK. Presentations by Richard Sandell (University of Leicester, United Kingdom), Erica Lehrer (Concordia University, Montreal, Canada), Mahret Ifeoma Kupka (Museum Angewandte Kunst, Frankfurt am Main, Germany) and Marlen Mouliou (National and Kapodistrian University of Athens, Greece) shed light on curatorial practices that face hidden stories and ‘difficult’ heritage. Exhibitions rooted in this mission not only question blank spots in museum practices, even more they disrupt visitor experiences thus leading to unexpected reactions and challenges for institutions and practitioners. All projects provided inspiring examples how to work collaboratively with gaps and absences in exhibitions and collections building on methods such as emotional mapping, artistic research, community outreach or influencer involvement. However, to become these productive and creative spaces for new narrations all speakers flagged the need to establish the museum as a safe space in the first place. Facing structural inequalities within the museum as well their audiences and society is crucial for memory institutions who want to bring about social change.

The final panel of the conference pursued the question of ‘Exhibiting Europe?’ and included speakers from four different European museums: Anna Schmid (Museum der Kulturen, Basel, Switzerland), Kieran Burns (House of European History, Brussels, Belgium), Kárla Kuti (Hungarian National Museum, Budapest, Hungary) and Markus Moehring (Three-Countries-Museum Lörrach, Germany). Brigitte Heck (Badisches Landesmuseum Karlsruhe, Germany) chaired the panel which showed the inherent struggles surrounding representation and identity in exhibition displays. How can museums function as interpreter for micro- and macro-memories and invite visitors to change their perspective? The concepts of multivocality and shared memories offer rich theoretical points of departure but how they can successfully be transformed into engaging displays and narrations yet needs to be studied more in depth. In relation to earlier discussions the political entanglement of collective memory-making and structures that hinder sectional approaches became visible again.

Due to the variety of themes and critical perspectives presented, the task of closing the conference with an encompassing discussion was not an easy one, as was pointed out by Sharon Macdonald (Humboldt-Universität zu Berlin, Germany), chair of the final session. She invited all four panel chairs to sum up their reflections without hesitating to be provocative or ‘whacky’. As she stated museums are finding themselves in an exceptional moment where critiques of their practices and collections are abound but faced with a renewed energy to address them. This could be described as ‘cutting that cake of diversity in unexpected and many ways’. Coming back to the main conference question, the final session found diverse answers ranging from more playful ways and jokes, to turning towards ‘who is missing?’ and making absences radically visible. Oscillating between objects (what) and people (who) the conference once again emphasized the political act of exhibition-making and collecting and suggested sensitivity, serendipity and thinking outside the box as strategies for change. Participatory Memory Practices will be essential to navigate this process. 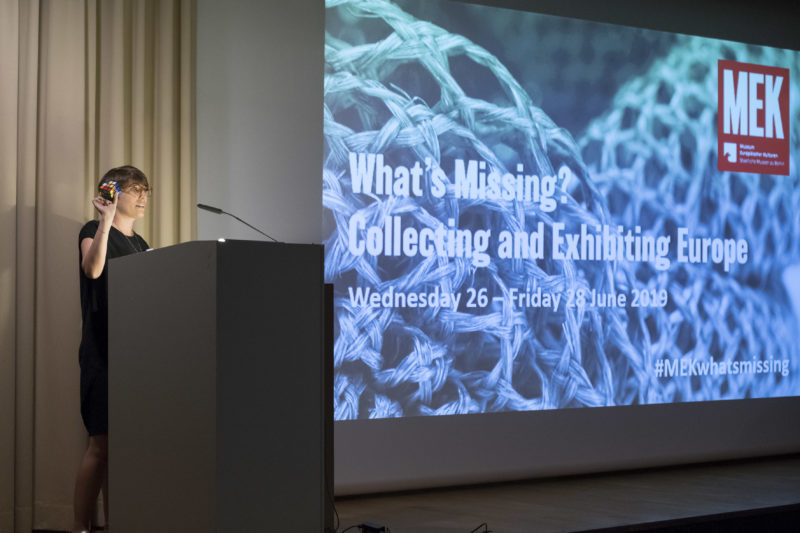