The evolution of the POEM model

The POEM model was first outlined at the beginning of the POEM project and built on the three work packages of the program: Building connectivity by Memory Institutions, Groups and Individuals, and Memory Modalities (pictured below). As POEM progressed, we started to evaluate the model and aimed to develop it based on the empirical research undertaken by the 13 fellows. In this piece, we reflect on the development process and look ahead. 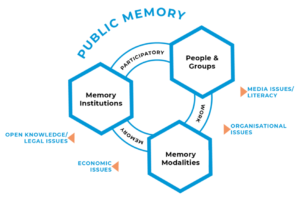 The initial version of the POEM model

A work in progress

Earlier this year, the Cyprus team co-organised a productive method, engaging with the 13 individual empirical studies remotely and finding cross-sections that overlap and could be considered ‘core’ to the POEM model. All fellows used their empirical data to answer questions about five themes, writing a synopsis as preparation for discussions during Knowledge Hub 6 (KH6) in March 2021. These themes were (1) Doing memory practices; (2) Participating in, opening up, and including through memory practices; (3) Using digital/non-digital media infrastructures for making participatory memory practices; (4) Creating publicness and debating public issues through participatory memory practices; (5) Organising and institutionalizing participatory memory practices. During the online meeting we had fruitful conversations around these themes, directly related and referring to the empirical work done. At the end of this deep-dive into the research, in our concluding discussion we focused on how to implement this into a new version of the model. To put thoughts into action, six fellows – the authors of this piece – formed a model working group, and took on the task of designing a next draft of the model.

Apart from this being a fruitful exercise for all POEM members, the takeaway regarding the model was that the main elements are to be considered intertwined and connected. Instead of a static, 2D model we began to envision an animated 3D shape, where the separate elements extend, move, and slightly bend to visualise the nuances we identified. Through animation, the rather abstract concepts we’ve been working with can be communicated in a more playful and interactive way. While the animated version is still in progress, the static version below shows the evolution of the model: 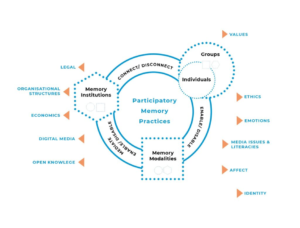 The second draft of the POEM model

The model has three layers: First, Participatory Memory Practices (PMP) is situated in the middle as our main working concept. Second, the three POEM working package concepts and their in-between relations. Third, other elements, visualized as triangles, indicate concepts and issues that are relevant and appear in our research. Compared to the first version, you will see that the POEM working package concepts remained the same. However, we visualise that they are different by representing them in different shapes, and that they are connected by embedding the shapes within the others and making their lines permeable. The central circle with relational concepts we envision as turning like a wheel: the concepts describe different parts of the relationships between all WP concepts and PMP. The elemental concepts in the third layer ‘float’ around: some are more relevant for individual research projects than others.

Model 2.0 is still a draft. The final version of the model will be presented on the POEM website and include an overlay with explanations of the different concepts represented in the model, as well as links to the individual research projects related to each particular concept. In that way, we see the model as a summary and result of the POEM research project as it is based on the empirical work conducted by the fellows over the past three years. The model also functions as an easily accessible introduction into the various areas and concepts we’ve been working with and developing throughout our studies. However, we very much hope that the model can be used as a tool for discussion across the GLAM sector, education, academia, NGOs, cultural policy and by anyone else who is interested in or works with memory. The model can be used to devise new questions and consider relations between stakeholders.

Impact evaluation of the POEM model

In the context of the seminar “Community Based Research: Social Impact Evaluation in the Cultural Sector”, led by Neils Geib during the Spring Semester 2021 at the University of Hamburg, students created comprehensive impact evaluation frameworks for aspects of the POEM model, as derived from the doctoral fellows’ research. The seminar was conducted in close cooperation with the coordinator of the POEM project Prof Dr Gertraud Koch, the project manager Samantha Lutz, as well as the POEM fellows Lorenz Widmaier, Angeliki Tzouganatou, Susanne Boersma, and Prof Dr Elisabeth Tietmeyer, from the Museum Europäischer Kulturen in Berlin, as a POEM consortium member. The students had the opportunity to work on three POEM cases: the “My Digital Legacy Booklet”, Open Access Provision, and daHEIM. They formed groups and worked towards the design of an individual social impact measurement concept based on these cases. We want to look at one example in more depth:

The Master students Jannik Schulz and Sebastian Stürzebecher worked on a case study focused on opening up Memory Institutions’ collections through an API, namely an application programming interface. The target group that they identified as most significant was that of the content creators, such as platform users, teachers, artists, researchers etc., and they built their framework according to them. After designing the social impact chain, they meticulously put together the output and outcome indicators, towards a quantitative approach measuring, among other issues, the response time, the number of recurring API users, and how much time the users spent on the website. Later, a survey would follow to measure the impact and focus on the three domains: social inclusion, high engagement to cultural knowledge, and empowerment of the public to knowledge creation. Finally, they created an analysis model comparing outcomes and impact in one year-time. All in all, what was also discussed for future work is to consider some qualitative approaches as well, and also a long-term evaluation plan.
What’s next?

In June during KH7, in addition to the impact evaluation of these tools, we came together with the full POEM network to further discuss the model. The model working group organised a meeting to empirically validate the model, by devising different personas. The aim of this task was to place the model in real-case scenarios and think about how it could be used by different stakeholders. GLAM professionals, Educators, Special interest groups and Decision Makers outside of GLAM, were the imaginary protagonists of this exercise. Together we investigated their needs, in order to get a clearer view on how to improve the model. The different needs ranged from potential educators using the model as a prompt to encourage students to develop their own research questions, GLAM professionals engaging with the model as critical thinking tool when designing inhouse projects as well as working with external collaborators, or making sure that the model is always relatable through connecting it to practical, concrete examples so it can be used as a conversation started for working with special interest groups. Based on the results of the impact evaluation and the new visualisation draft, we are hoping to soon animate and finalise the new model. We will keep you updated about the progress and hope you will find it useful.