By Jennifer Krueckeberg (University of Hamburg)

My two month secondment in London, at POEM Consortium member Ashoka UK, started right at the beginning of January 2020. Ashoka is an international non-profit organisation whose mission is to shape a global, entrepreneurial, competitive citizen sector: one that allows social entrepreneurs to thrive and foster people’s abilities to become changemakers. It was an interesting experience to see the workings of such a large international organisation. Particularly the weekly team meetings offered insights into Ashoka’s day-to-day work, various programmes, events, and organisational philosophy.

Since my PhD research project investigates how young people use digital media for their personal memory making practices, I was particularly interested in Ashoka’s Changemaker Schools, who have been selected for strongly demonstrating empathy, creativity, leadership, and teamwork as core values. I was very excited to have been able to agree on conducting a digital storytelling workshop with one of them in East London.

Digital Stories are short audio-visual personal narratives that are constructed from participants’ own views. Due to its playfulness and artistic approach, the method is well suited for doing research with young participants. In addition, the method critically engages with the often one-sided position of the researcher as a ‘data extractor’ (Gubrium & Harper 2013). Therefore, I was happy that the workshop would be of mutual benefit: providing an interesting extracurricular activity for the pupils, where they could learn how to use techniques of producing short films and an opportunity for myself to research how young people frame memories into narratives and think about digital media.

Conducting a digital storytelling workshop in an East London school
The school, in which the digital storytelling workshop took place, included primary as well as secondary level. For six weeks, I met with 11 pupils from year 9, aged 13-14 years, every Thursday afternoon. Just by entering the school building, it was apparent how fundamental digital technologies are for everyday operations of modern schools. As a visitor, I had to register with a photo and log in to a system, which then sent an email to a person to pick me up at the entrance. I had to carry a visitor’s pass with me and as I observed, the pupils as well were carrying passes that checked them in and out and opened the entrance door for them. The school’s digital infrastructure, which is tailored to the needs of teachers and pupils, was sometimes a hindrance, when it came to communicating with the pupils or trying to show them a video on Youtube, since the website is blocked on Student and Guest Wi-Fi.

At the beginning of the workshop, I invited the pupils to tell a story based on a personal memory of their choice. A memory that could mean anything to them: sadness, happiness, excitement, adventure, everydayness, love, family. The class was very engaged and reflected the cultural diversity of the school’s neighbourhood. After a short explanation of the workshop and my research in the first session, we started by writing short scripts of about 300 words, mostly using their tablets, which are an essential educational device and integral part of their everyday activities in school. Even coursework submissions were largely done over the tablets to upload their work to cloud services like Google Classroom.

Because the pupils had different speeds we continued the script writing in session 2 and 3, while also starting to create storyboards to frame their stories visually, by using old-fashioned paper, glue and colouring pens. The last 3 sessions were spent with collecting images (either pictures they already owned, had to recreate or searched for online), shooting footage in school corridors and the recording of a voice-over, which many students felt was a strange experience, since they didn’t like hearing their own voices. Particularly, the pupils’ wishes to tell their stories as authentically as possible was striking. 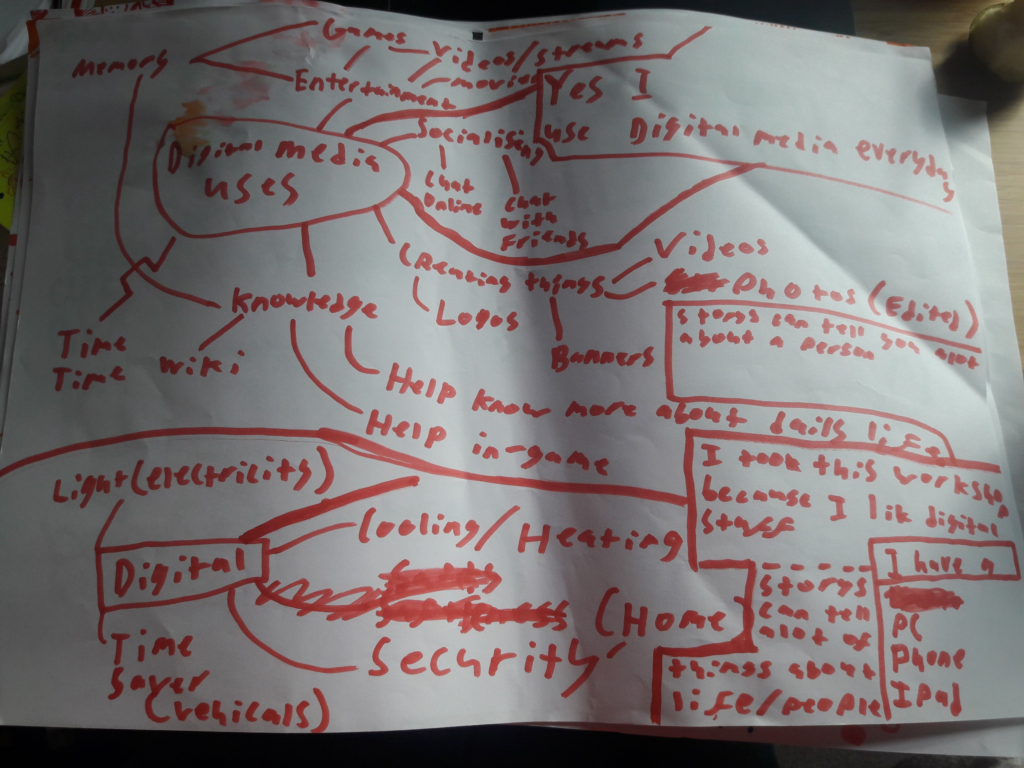 In several instances, the children demonstrated the immense role digital technologies play in their lives as well as their own critical views of it, which often confronted me with my own misconceptions. Anecdotally: when attempting to train pupils on how to use the editing program on their tablets to make sure they could proceed without issues, it quickly became apparent, that most of the pupils had prior experience with the software. One of the students confirmed this impression by saying:” But Miss, everybody knows that.”

The stories the pupils produced ranged from special events like school trips, football competitions or family holidays to how they became interested in their hobbies. Yet, there were also darker memories, like near death experiences, accidents or sicknesses in the family. It was interesting to see that pupils, tried to choose a particularly exciting story or changed later on, when they felt like, the memory did not provide enough suspense. The results were stunning and often heart-warming stories of their memories.

While not an everyday activity and being rather controlled in terms of what is done in each session, the workshop allowed me to explore how young people conceptualise and narrate their memories as well as ‘perform’ their identities through them. In addition, I was able to casually talk with the children about the use of digital media in their everyday lives as well as observe how they interacted with it.

Challenges of conducting a digital storytelling workshop in a school setting
Despite having mainly positive experiences of experimenting with digital storytelling as a research method, there are challenges when applying the method in a school setting. For instance, the principle of establishing horizontal structures where researcher and participants fall on equal hierarchical footing was hard to implement. Most children saw me as another ‘teacher’ and addressed me formally as ‘Miss’, even after I offered multiple times to just be called by my first name. Moreover, it was a process of negotiating the school rules, busy school premises and the needs for my own research.

Acknowledgments
I would like to thank the pupils for their great work and sharing their time and ideas with me. I am also very grateful for the immense support and help I received from the teaching staff.

Jennifer Krueckeberg is a POEM PhD fellow based at the Institute of European Ethnology/Cultural Anthropology at the University of Hamburg (Germany). Her project investigates how young people from various backgrounds use digital media for their memory making practices and the meanings they ascribe to them.
Twitter: @JKrueckeberg
Email: jennifer.krueckeberg@uni-hamburg.de 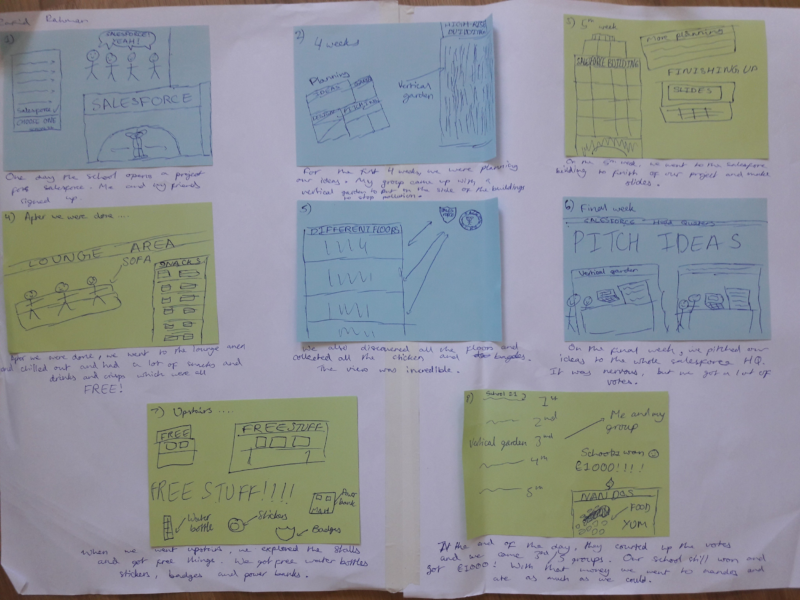