Every semester, one of the POEM partners is given the opportunity to welcome all the fellows and their supervisors at their local institutions for a week of intense lectures and training. This spring, it was finally our turn and we were excited to organize and prepare Knowledge Hub 4 in our current home city Aarhus, which is the second-largest city in Denmark and located on the east coast of the Jutland peninsula.

The POEM Knowledge Hub usually comprises of guest lectures and seminars, followed by a two-day training unit. For the KH4 in Aarhus we were excited to welcome Professor Dr Heike Winschiers-Theophilus, who is a scholar at the partner organisation Namibia University of Science and Technology (NUST), as a guest lecturer, invited to present her work on participatory community technology projects in Namibia. She is also the local supervisor of Asnath’s project providing her expertise in community participatory projects. Furthermore, Prof Ton Otto, who is a professor of Anthropology at Aarhus University and part of the  POEM consortium, as well as professor and research leader at James Cook University in Australia and current fellow at the Aarhus Institute of Advanced Studies, had planned to share insights with us on his work relating to the emerging field of design anthropology. During the last two days, Ross Hall, who is the director of Education for Ashoka UK and co-founder of The Weaving Lab and also part of the POEM consortium, had scheduled an intense training unit on the changing role of leadership in an age of hyper-connectivity and constant change, drawing from his leading role in the development of the Ashoka Changemaker School Network.

In addition, the Aarhus team had prepared one more exciting treat for our joined time in Denmark: The Open Space. A brainchild of Rachel Charlotte Smith, Associate Professor of Human-Centered Design in the Department for Digital Design and Information Science at Aarhus University, and Prof Ton Otto, the Open Space was designed to create a space of reflection that goes beyond ready-made PowerPoint presentations and one-dimensional progress reports. The POEM fellows were invited to visualize the current status of their research projects with the help of actual empirical material such as print-out of images, audio-recordings or other things they thought worth collecting during their time in the field and secondments. By focusing on the relationship between the object and the concept of memory they were encouraged to create new narratives, concepts and frameworks that could inspire them to approach their work from a different perspective and create connections to other research projects within the POEM network. 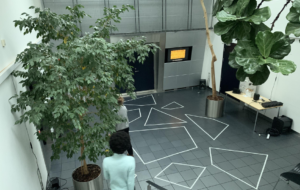 And so, we went ahead, booked all the necessary venues, ordered food, organized a tour of the beautiful Moesgaard Museum to give our colleagues a bit of relief in between, found a cozy place in the old part of town to hold our social dinner and ordered fun handicraft material for the Open Space. In parallel, in another part of the world, whole countries started to shut down, air-traffic became more and more restricted and the Coronavirus slowly began making its way towards Europe, knocking on Italy’s door first with devastating consequences. As a result, based on the Danish government’s announcement the day before, Aarhus University decided to close its door on 12 March 2020 and urged its employees and students to refrain from coming to work. As a consequence, the KH4 at Aarhus University had to be cancelled.

It would have been a shame to completely cancel the much-anticipated Knowledge Hub. Thus, we had to quickly come up with a contingency plan of hosting the activities online. Together with the POEM project management team in Hamburg, we had long discussions on strategising and discussing which activities will be feasible to execute in a virtual space and if they will bear the same effect as originally planned.

After a careful consideration and assessment of the situation, we came to a conclusion of hosting the Spring School including only three main elements of the programme virtually: POEM toolbox, the joint knowledge production and Prof. Heike Winschiers-Theophilus lecture. We cancelled the Open Space, and Training unit four because the anticipated results will be almost impossible to achieve. However, we agreed to carry out the two activities during Knowledge Hub five but with an adjustment to fit the PhD projects will be at then.

The virtual Knowledge Hub was short. It started on 31 March until 1 April 2020, with the longest sessions being 3 hours only (of course with breaks in between). We also had to consider the time differences because not all the POEM members reside in Europe. It was nice to meet everyone virtually, but it could never match the physical meetings. Getting used to this new normal was just starting. 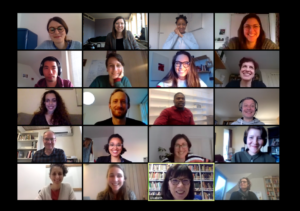 The POEM toolbox discussion was a good start in generating ideas of what could be in the ultimate output of the POEM project – the toolbox. The toolbox will mainly contain the concepts, techniques on participatory memory making in relation to working with different stakeholders as specified in the three work packages. The joint knowledge production has been part of other knowledge hubs as well. In this case we discussed a bit on the relationships between the projects within the work packages and some of the findings that could potentially contribute to the POEM toolbox. Each work package discussed in breakout sessions and later had to present their ideas to the rest of the team. On the last day of the Knowledge Hub, we had Prof. Heike Winschiers-Theophilus presenting her work in Namibia. In her presentation titled ‘where the past is still present’ she explained how she is co-designing technologies with indigenous and marginalised communities in Namibia.

It is a custom for the fellows to meet during the Knowledge Hubs to discuss their PhD journeys and a space where support and encouragement happens. This practice still went on during the virtual knowledge hub.

Even though this Knowledge Hub did not happen as originally planned, and it was at the beginning of when everyone was getting used to the new normal, it taught us a lot. Especially when it comes to using new online tools for collaboration and engagement. We are hoping that the following Knowledge Hub will still be in London. However, a suggestion has been made to plan for an online KH5 just in case the situation does not get better.