On the need to change the public refugee service system

With a total number of about 26.3 million refugees worldwide (www.unhcr.org), the so-called “refugee crisis” has become a grand social challenge. Many cultural organisations are using their capacities to improve the well-being of refugees through different actions and initiatives. For example, Kampnagel, a well-known cultural organisation located in Hamburg, Germany, created the so-called “REFUGEE | ISM Cosmos” (www.kampnagel.de). Cosmos members argue that individuals “are very much involved in finding their roles in society as well as their current representation in art: as representatives of their biography and as self-determined actors of a future community.” I completely agree with the above statement, although I think that both self-determined activities as well as changes of the public refugee service system are necessary. In the following, I will summarise key elements of a recently published article on this topic (Boenigk et al. 2020).

The paper I want to focus on uses the terms “refugee” and “refugee crisis”, even though I critically reflect and recognise that these are not the terms affected individuals like to hear or use. I think that language builds public perceptions and therefore a dialogue on a better terminology is necessary. Back to the Kampnagel example, where the cosmos members state: “in the first place, we don’t like to be called ‘refugees’. We ourselves call each other ‘newcomers’ or ‘immigrants’.” Thus, let´s use “newcomers” here and in the following, whenever possible!

The article “Rethinking Service Systems and Public Policy: A Transformative Refugee Service Experience Framework” was published in December 2020 in the Journal of Public Policy and Marketing. The ideas were developed during a Transformative Consumer Research (TCR) conference in 2019. A multidisciplinary research team of academics and practitioners from different disciplinary backgrounds worked on the article, whose core contribution is the development of the so-called “Transformative Refugee Service Experience Framework”.

Figure 1 shows the framework in an overview. The upper part of the framework reflects that the newcomers’ service experiences with regard to, for example, access to higher education/university, finding an own apartment or a new job, are strongly interrelated with the overall characteristics of the host country’s service system. In the article, we discuss two types of experiences: the newcomers’ suffering versus their well-being. The public service system also distinguishes between two overarching forms: hostile versus hospitable service systems. With the term “hostile”, we try to cover all unfriendly behaviours or barriers, which newcomers might encounter. The article discusses examples of hostile service systems in several countries, such as Venezuela, Jordan and Turkey.

In contrast, we as authors consider the hospitable service system to be “an open, flexibly designed system that permits the free flow of actors and resources to co-create value and well-being with” newcomers (Boenigk et al. 2020, p. 6). To illustrate this, we present cases from Somalia, Uganda and Colombia in the Web Appendix of the article. 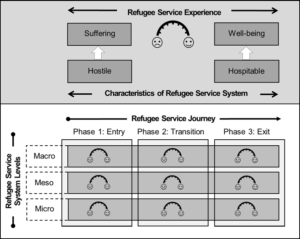 In the lower part of the framework, we argue that more research and actions on all phases of the refugee journey are necessary. Today, most work focuses more or less on the final stage after individuals have arrived in the host country, where a hospitable service system should link newcomers’ service needs to providers and actors at different levels. We differentiate here between three levels: micro, meso, and macro level. On page 8 of the article, we then merge the journey phases and the service system levels and explain hostile/hospitable refugee service systems in more detail. Moreover, the article contains a comprehensive research agenda, which should also be interesting or inspiring for the members of the poem network (see Boenigk et al. 2020, Table 1_Web Appendix).

The authors of this article hope that the framework provides a starting point to critically evaluate a country’s own refugee service system, and that it will inspire memory institutions in Europe and worldwide to create new or improve existing service initiatives to the benefit of newcomers. 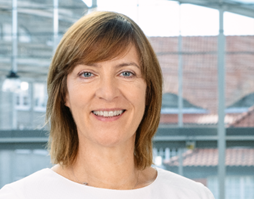 Prof. Dr. Silke Boenigk is professor for Nonprofit Management at University of Hamburg (UHH). She holds a PhD in Business Administration from the University of Basel, Switzerland. As an internationally known nonprofit researcher she publishes regularly in international journals, such as Nonprofit Management & Leadership, Nonprofit Voluntary Sector Quarterly, Voluntas. Between 2015 and 2018, she was refugee officer of the University of Hamburg, and until today she is the academic director of the university’s large and comprehensive refugee orientation and integration programme named #uhhhilft.

Her research interests are Nonprofit Management & Leadership, Nonprofit Relationship Marketing, Fundraising, Transformative Service Research on Refugees, and other nonprofit related topics. Moreover, she is a member of ServCollab, a service research organisation for diagnosing and treating humanity’s service system problems, whose first service inclusion project is on refugees (www.servcollab.org).

Her current work on the “refugee crisis” includes the following two articles: